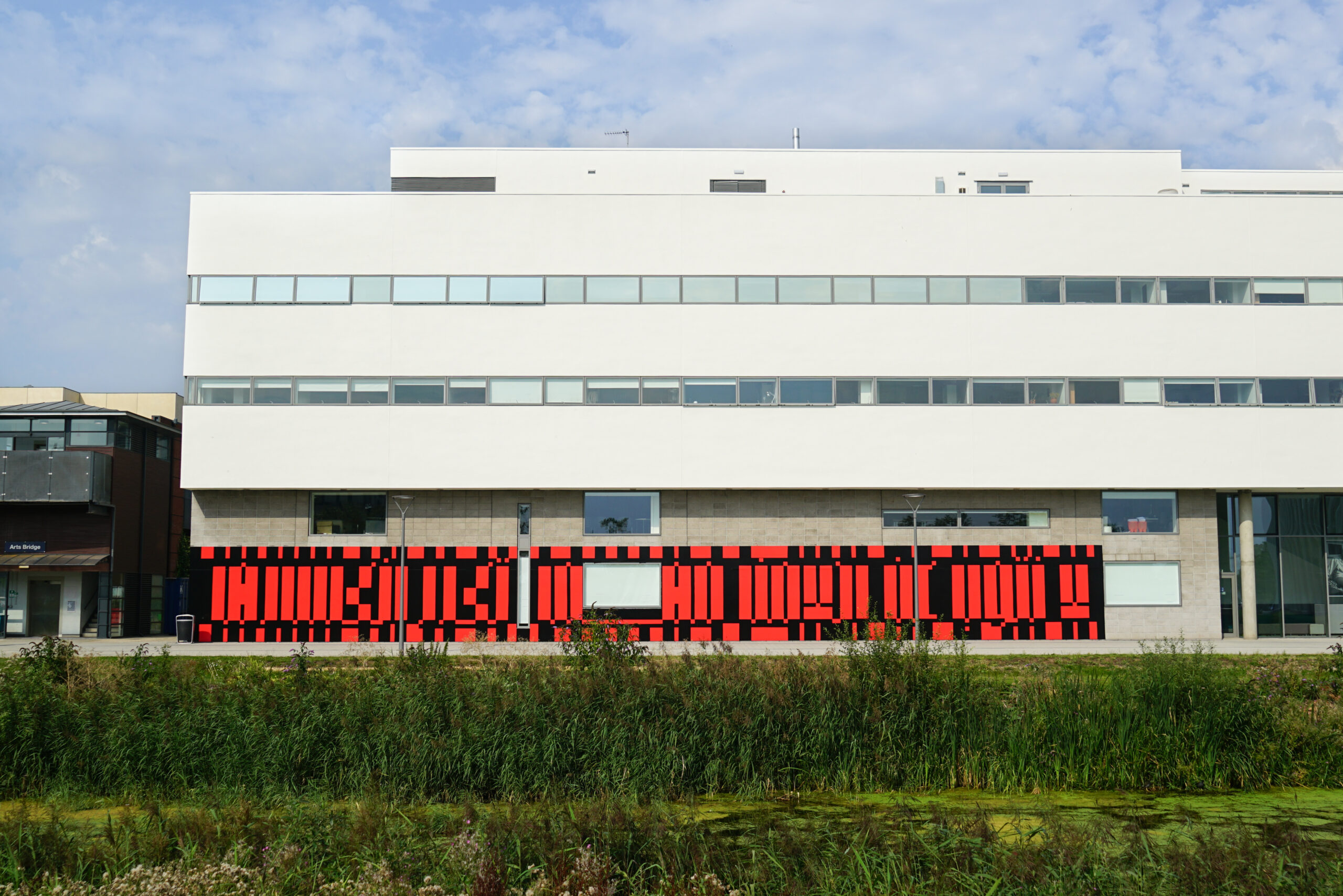 “I paint poetry by the Palestinian poet of resistance Mahmoud Darwish (1941-2008) on the walls of different cities around the world in new and originals forms of the Arabic script. I use lines from his poetry to tell the world that ideas cannot be killed, to show that we are united in our humanity and our struggle against oppression and dictatorship.

Darwish is seen by many as a poet on the side of the People, whatever their race and wherever they are. ‘At the Corner of a Dream’ is a line from his poem ‘It was what it was going to be’. I paint Darwish’s words on the walls of cities around the world in anticipation of a dream that I believe is around the corner for all of us.” – Bahia Shehab, 2019.

Bahia began taking to the streets with her artwork during the Egyptian revolution of 2011. Since then she has taken her peaceful resistance – using lines from Palestinian poet Mahmoud Darwish – to the streets of the world, from New York to Tokyo, Amsterdam to Honolulu. Through her work she demonstrates how an idea that started on the streets of Cairo has travelled to the walls of the world.

For Lincoln Bahia has chosen the Darwish stanza “we will not repent our dreams no matter how often they break”. By imbuing poetry with political messages, she has managed to show how art can be used to better understand the present and find solutions for the future. The artwork is not meant simply to be read as a poem but rather to act as a cultural bridge and a space for conversation, tolerance and understanding.

Bahia has used a new geometric Arabic script in bold Lincoln Scarlet, acknowledging the City’s unique history. Inspired by the Magna Carta and The Charter of the Forest – key documents in the articulation of human rights which are both held in the city of Lincoln – she has responded to their shared intention to protect citizens against the abuse of power and to enable social justice. The design can be read from a distance as a barcode (often used as a symbol of consumerism and capitalism) or as prison bars.

We Will Not Repent is located on an exterior wall of the Nicola de la Haye Art and Architecture Building on the University of Lincoln Campus. The artwork can be viewed by the public at any time. The artwork was created in August 2019 created in collaboration with over 40 volunteers from the Lincoln Muslim Sisters Forum, the Lincoln Arabic Supplementary School and members of the Mansions of the Future Volunteer Team.

Bahia Shehab is Professor of Design and founder of the graphic design program at The American University in Cairo where she has developed a full design curriculum mainly focused on visual culture of the Arab world. She has taught over fourteen courses on the topic. She frequently lectures internationally on Arab visual culture and design education, peaceful protest, and Islamic cultural heritage. Her artwork has been on display in exhibitions, galleries and streets internationally.

The commission has been curated by Clare Cumberlidge & Co for Mansions of the Future’s Summer Programme and was made possible by the support of the University of Lincoln and the Centre for Culture and Creativity.