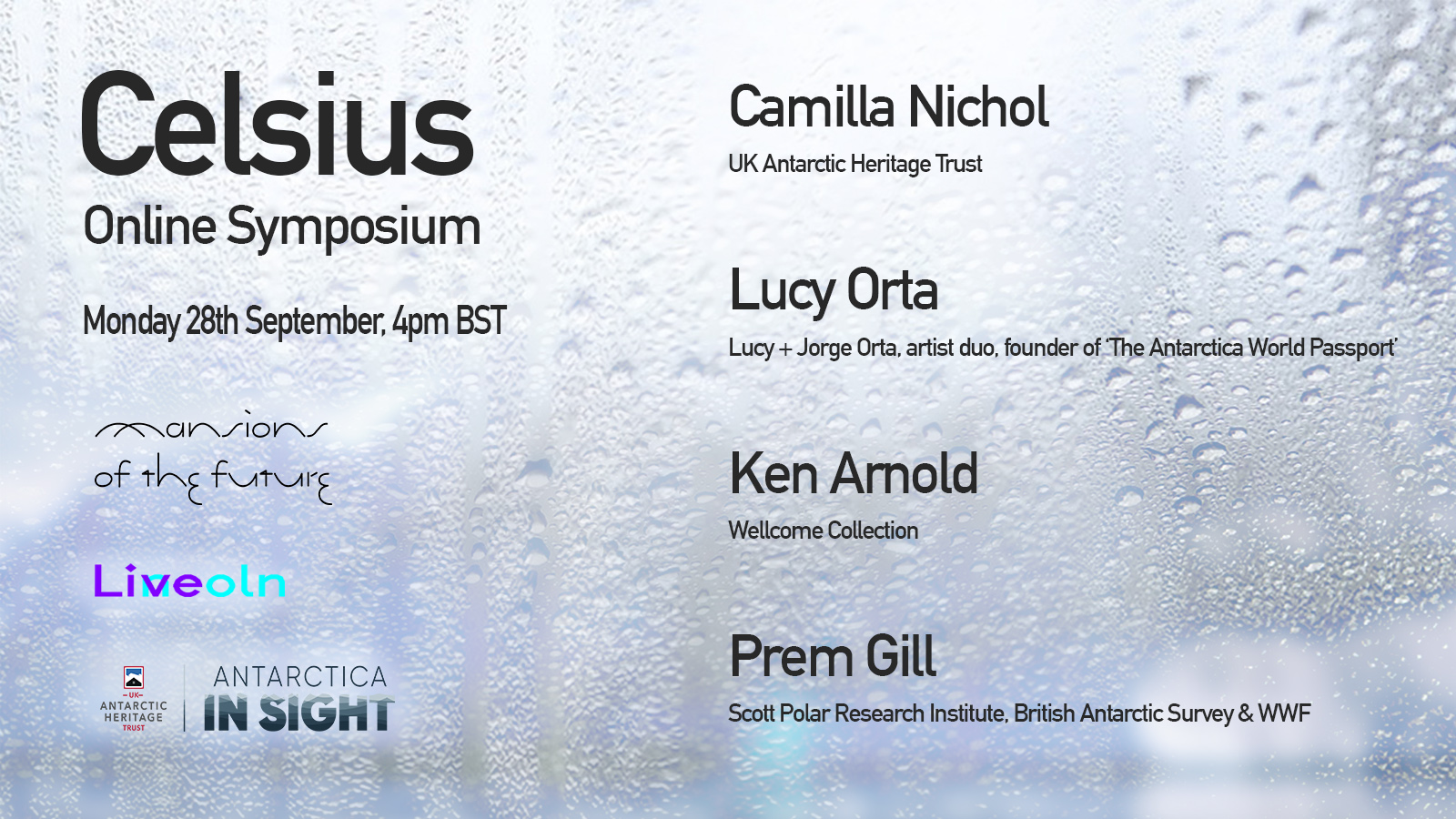 The first event in the Celsius programme is a symposium centred on humanity’s agency in preserving the planet, Antarctica’s role in the earth’s climate system and the value of scientific and artistic collaborative research to unlock understandings of contemporary global challenges. The panel will be composed of arts professionals as well as scientific experts, with a full list of presentations.

Ken Arnold. As Creative Director at Wellcome, Ken Arnold oversees international projects focussed on cultural engagement. The most recent is Mindscapes: an enquiry into aspects of mental health, which will principally be located in Bengaluru, Berlin, New York and Tokyo. It follows on from the now shockingly relevant Contagious Cities. Since 2016, he has also been Director of Medical Museion and Professor at Copenhagen University. During the previous two decades he spearheaded a number of multidisciplinary initiatives at Wellcome, culminating in 2007 with the establishment of Wellcome Collection, where he directed the first ten years of programming. He regularly writes and lectures on museums and on contemporary intersections between the arts and sciences. His book Cabinets for the Curious (Ashgate, 2006) explored England’s earliest museums. And he is currently researching a book about the enduring significance of these curious institutions.

Prem Gill is a PhD candidate leading the “Seals from Space” project with the Scott Polar Research Institute (SPRI), British Antarctic Survey (BAS) & World Wildlife Fund (WWF). For this research, Prem uses very high-resolution satellite data and remote sensing techniques to study Antarctic seals and their sea ice habitat. Outside of this, Prem is interested in increasing opportunities for underrepresented / disadvantaged groups to enter non-typical fields at leading institutes. As the founder of Polar Impact: Minorities in Polar Research network and BAS ECR Diversity Champion, he has used his research to spearhead multiple projects to attract and retain talent from non-traditional backgrounds within polar and conservation science. This work spans a range of audiences, from hosting citizen science events to creating art installations using Antarctic seal sounds to produce Grime music.

Camilla Nichol is the Chief Executive of the UK Antarctic Heritage Trust, a UK-based not-for-profit which conserves six heritage sites on the Antarctic Peninsula. The focus of UKAHT is to inspire current and future generations with the extraordinary stories of human endeavour in Antarctica so that they might take responsibility for the future care of this incredible continent.

She studied Geology at the University of Edinburgh followed by Museum Studies at the University of Leicester. She has had a varied 20+year museum career working for organisations with collections as diverse as geology, scientific and medical instruments, anatomy and pathology, gemology, Scottish football and the early oil industry.

Camilla is particularly interested in how different perspectives can enable us all to understand and value Antarctica; whether those perspectives come from artists, scientists, historians, travellers, young people or politicians.

Lucy + Jorge Orta – Artists Lucy Orta (1966) and Jorge Orta (1953) operate a collaborative visual arts practice and employ a diversity of media including painting, sculpture, film and performance to realize major bodies of work that address key social and ecological challenges. They began working on the body of work entitled Antarctica in 1995. For them, the continent of Antarctica embodies Utopia: the extreme climate imposes mutual aid and solidarity, freedom of research, of sharing and collaboration for the well-being of the planet earth. A metaphor, embodied by an immaculate whiteness that contains all the wishes of humanity, spreading a message of hope for future generations.

BECOME A WORLD CITIZEN: Sign up for your Antartica World Passport

In 2007, commissioned by the End of the World Biennale, the artists finally realised their dream to travel to Antarctica where they installed the ephemeral artwork Antarctic Village No Borders, which has since become a powerful symbol of a new world community. Here, they also raised the Antarctica Flag as a supranational emblem of human rights.  Following on from this artistic expedition, in 2008 for their survey exhibition Antarctica at the Pirelli Hangar Bicocca centre for contemporary art in Milan, Lucy + Jorge Orta created the Antarctica World Passport Office and published the first edition of Antarctica World Passport[1]. Facsimile passports are distributed to anyone who signs a pledge to become a member of the Antarctica world community, either virtually via the online platform www.antarcticaworldpassport.com, or at live-events programmed in cultural institutions and international NGO forums. The travelling Antarctica World Passport project provides a discursive platform to discuss issues relating to the environment, politics, autonomy, habitat, mobility and relationships among peoples.

Linda Rocco  is a London-based contemporary art curator and PhD researcher at the Royal College of Art. She has curated public events and exhibitions internationally with established small-scale institutions as Delfina Foundation, to warehouse spaces such as Yinka Shonibare’s Studio Guest Projects including the curation of the public sphere for Nine Elms on the South Bank. Linda is the co-founder and director of ‘I’m Here, Where Are You?’ a festival and engagement programme co-produced with Cambridge Junction.

She also co-directs the not-for-profit organisation _inventory platform, which operates globally to engage communities in the urban and rural context through socially engaged art projects.

Linda regularly works as curator for artists and private galleries, as well as consulting for charities, foundations and public institutions on accessible, inclusive and socially engaged arts; collaboration with STEM subjects as well as participatory and intermedia practices.

This event is delivered by independent curator and researcher Linda Rocco as part of a wider programme marking 200 years since Antarctica was first sighted. Celsius forms part of Mansions of the Future’s Lincoln Live season and Antarctica In Sight – a UK wide cultural programme of activity supported by the UK Antarctica Heritage Trust. This series of talks, discussions and performance will explore the groundbreaking intersections of arts and STEM subjects with a focus on climate change and the uniquely precarious position of Antarctica in today’s sociopolitical climate. The week long programme will feature contributions from artists Rhine Bernardino, Lula Mebrahtu, Aidan Moesby and Josefina Nelimarkka.

In this moment we have been working with commissioned artists to rethink and reimagine how their contribution to the Lincoln Live Season can be revised and reimagined; how new work can be shared and enjoyed together with audiences in a safe, virtual, domestic and necessarily personal environment.