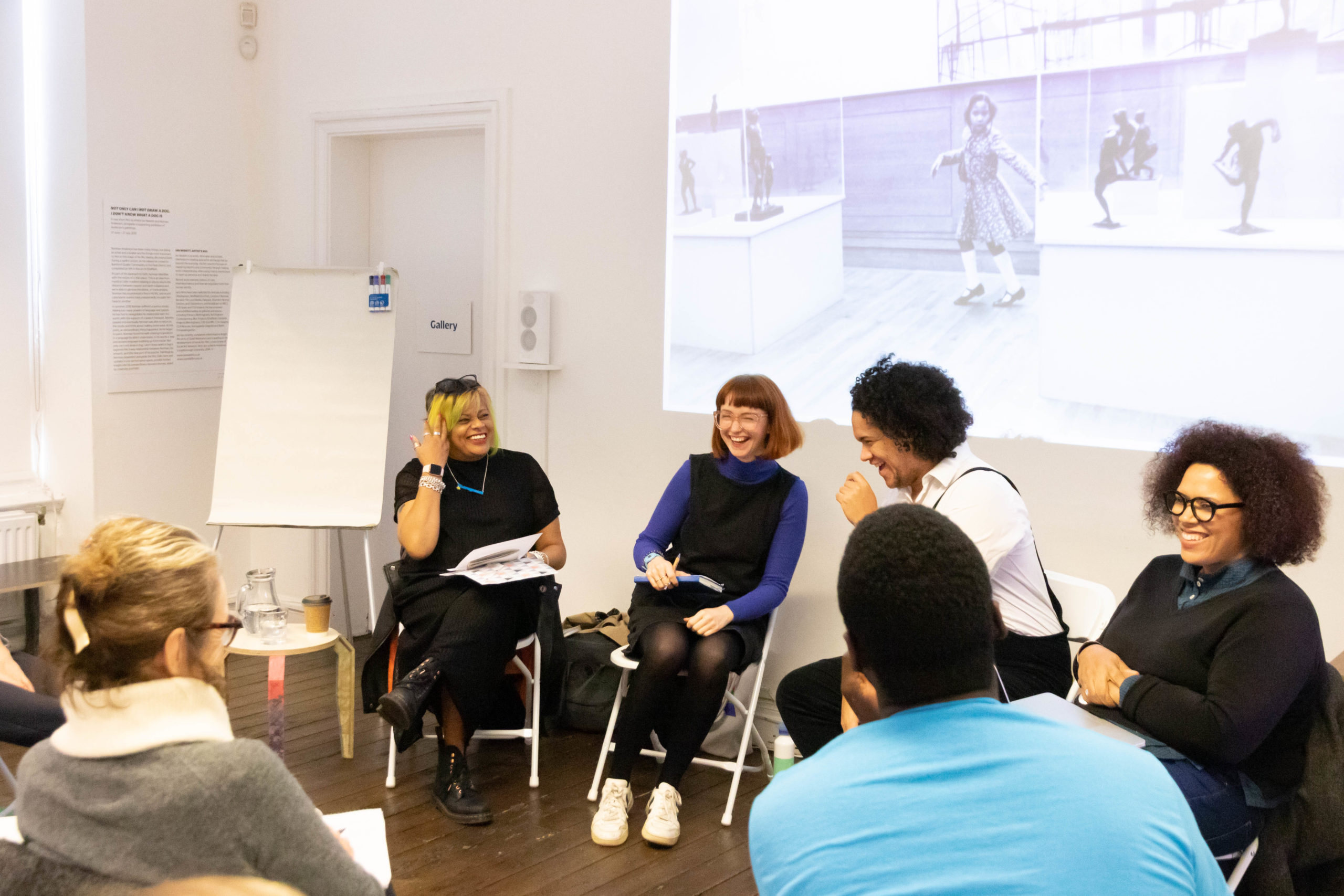 An open discussion around the development, delivery and maintenance of new and existing platforms for artists, performers and cultural producers that successfully present work that is concerned with ideas of representation, including misrepresentation, under-representation and misinterpretation. Together we will compare platforms with an agenda to critique these concerns with those that champion artists of colour, womxn, queer, trans, intersex and non-binary artists making work outside of the constructs of representation.

We must also consider platforms, mechanisms and tools that are or can be used by institutions and organisations to establish and grow minority audiences for projects, affording genuine experiences of work with and without a focus on representation.

How can such platforms be critical yet remain authentic to the communities that they serve? How can supporting cultural leaders from diverse backgrounds provide more platforms for representing a richer cultural ecology? What are the issues around isolating artists on the basis of their gender, race or sexuality? And what can go wrong?

The panel will be chaired by Lara Ratnaraja and include Cédric Fauq, Elspeth Mitchell and Rommi Smith. Each panel member will present an introduction into their own practice / research prior to entering into an open discussion with one another and the audience.

Please book separately if you wish to join us later for a writing workshop led by Rommi Smith taking place from 3.30pm. Concerns addressed during this conversation will inform the activities that follow. Click here to book.
—–

Cédric Fauq (b. 1992) is a French curator and writer currently based in Nottingham (UK), working as Exhibition Curator at Nottingham Contemporary, where he has been an employee since September 2017 (first as Assistant Curator part-time, then full-time, until he got promoted in January 2019) and beyond. There, he worked on projects involving Linder, Elizabeth Price, Trix & Robert Haussmann and Lis Rhodes. He is one of the co-curators of the multi-chaptered project Still I Rise: Feminisms, Gender, Resistance. Upcoming projects include a solo exhibition with Sung Tieu and a project on Grace Jones.

Previously, he was involved in the co-running of a project space in London (clearview.ltd); the co-curating of a Triennial (Baltic Triennial XIII); and interned at different places (David Roberts Art Foundation, Lafayette Anticipation and Galerie Crevecoeur notably). He devised projects for DOC, Paris and Sophie Tappeiner, Vienna, both in 2018. In 2019, he will be curating exhibitions at Nir Altman Gallery, Munich and Cordova, Barcelona. He published in Mousse Magazine and spoke at Tate Modern, amongst others.

He studied in Paris for 5 years, supported by state bursaries and an association promoting equality of opportunities in higher education (Article 1, formerly known as Frateli) at Henri IV; Paris I University and EHESS. He then moved to London, thanks to a private-bank loan granted via a specific scheme set-up by Article 1 / Frateli. He didn’t get his degree as he wasn’t able to pay for his second year (having spent his money setting up clearview.ltd, by choice), although he completed the full course.

Current research and obsessions include: questioning knowledge ownership; devising fugitive display through blackness; attending the sunset of democracy; dreaming about prison and gender abolitionism and paying his debts.

Elspeth Mitchell is a Research Associate in Practices and Theories of Feminism and Art at Loughborough University with a focus on feminist theory, critical pedagogy and the moving image. She is also the producer of Art School for Rebel Girls, a collaborative project developed for, with and by young women in partnership with Pavilion, a visual arts organisation based in Leeds.

Lara Ratnaraja is a freelance cultural consultant specialising in diversity, innovation, leadership, collaboration and cultural policy implementation within the HE, cultural and digital sector. She develops and delivers projects and policy on how cultural and digital technology intersect for a number of national partners as well as programmes around leadership, resilience and business development for the arts and creative industries. She works or has worked with the University of Birmingham, Coventry University, Birmingham City University STEAMhouse and University of Salford delivering and developing projects on diversity, digital engagement and research collaborations between arts, HEIs and SMEs. Other consultancy clients include Jerwood Arts, Imagineer, The Big Draw, Film Hub and West Midlands Screen Bureau.

She was the Sector Development Director – Creative, Cultural and Digital, Business Link West Midlands running a £6 million programme for the creative, cultural and digital sector.

With Helga Henry, she co-produced RE:Present and ASTONish; leadership development programmes which supported the development of cultural leaders from diverse backgrounds so that the cultural ecology of the city better reflects its changing demographic. Funding partners were Arts Council England and Birmingham City Council.

Lara has also developed, managed and delivered successful ERDF, ESF, ACE, AHRC and other funded and non-funded programmes and projects cross sectors and is well respected as a key influencer in the development of sector policy.

She is on the board of Stan’s Cafe, Coventry Biennial, SHOUT Festival and is on Arts Council England Midlands’ Area Council.

Rommi Smith is an international writer who has won numerous prestigious residencies and commissions for institutions ranging from the British Council to the BBC. Her work encompasses a number of historic “firsts”: Smith is the inaugural British Parliamentary Writer in Residence and inaugural Poet in Residence for Keats’ House. Hampstead. In 2020, Smith is Poet-In-Residence for the Wordsworth Trust, Grasmere.

A university lecturer and workshop leader, Smith is the curator of tailor-made word-based experiences for all kinds and groups and people. As a writing and performance mentor, for the last seven years, Smith has nurtured writers to masters’ study and competition level via her own workshop: Rommi Smith’s Poetry Workshop.

John Barnard Scholar at Leeds University, Smith is currently writing up her practice-led PhD fusing poetry, theatre and live jazz in an exploration of the legacies of the classic Black blues and Jazz women. Her research takes her to New York, where she has had the privilege of interviewing some of the greatest contemporary Jazz and Blues artists including Dianne Reeves and Esperanza Spalding.

Smith is a Visiting Scholar at City University New York (CUNY). Presenter of original work at The Segal Theatre New York and The Schomburg Center for Research in Black Culture, Harlem – her performance at Schwerner Writers’ Series in New York was at the invitation of Tyehimba Jess, Pulitzer Prize winner for Poetry.

In 2019, Smith’s academic writing was first published by New York University Press, as part of the groundbreaking book Imagining Queer Methods.  Smith is a recipient of an Arts Council England Award, a US Hedgebrook Fellowship and is a winner of the Northern Writers’ Prize for Poetry 2019.

This event is part of Represented: Platforms not compromise, a programme of events and activities highlighting an urgency for equality in representation and critiquing misrepresentation, under-representation and misinterpretation. In conversation with artists, writers, curators, performers, activists and communities, the programme aims to welcome, acknowledge and present a growing plurality of voices.