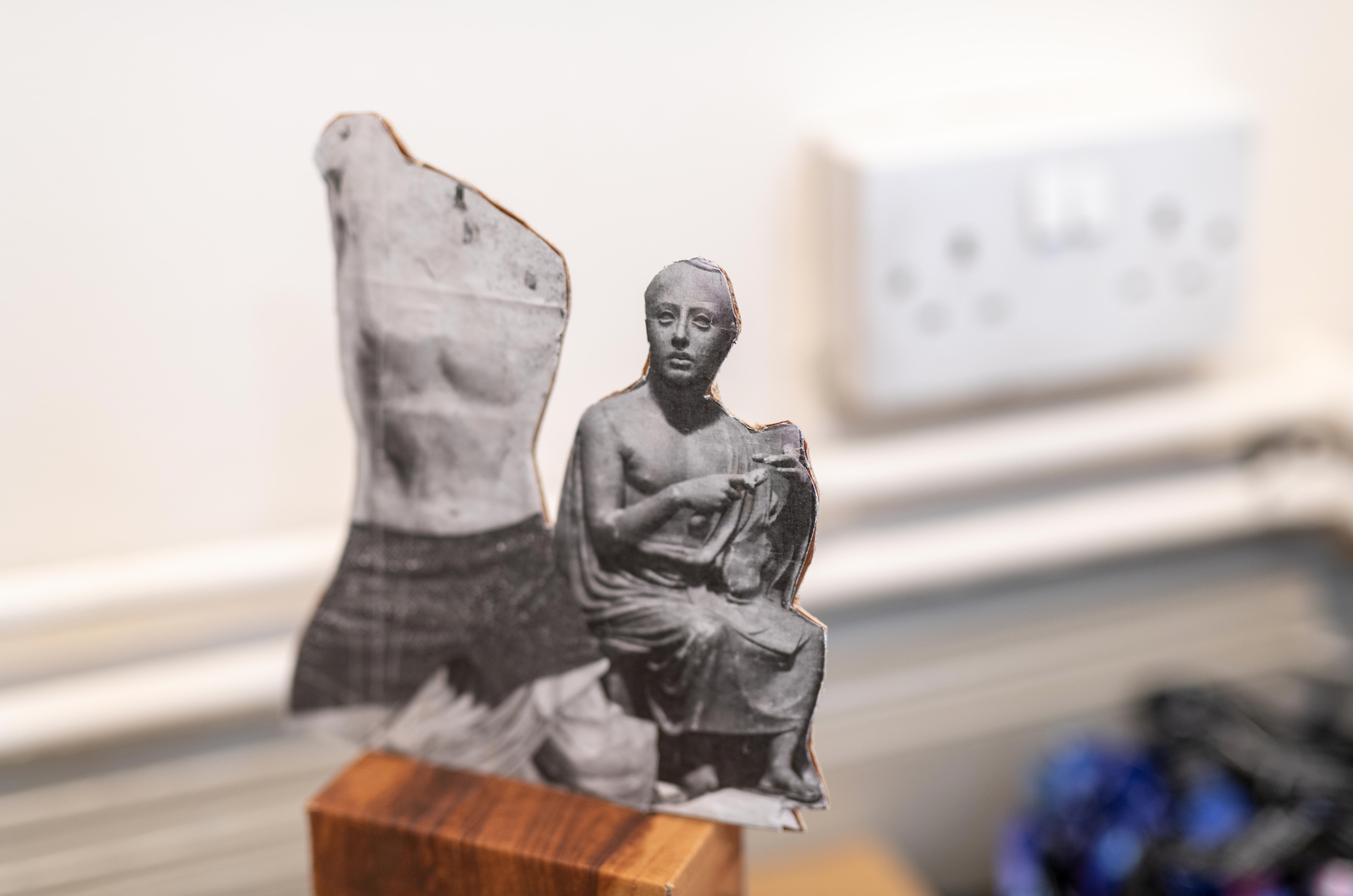 'Stunts', 2020, by Calum Bayne, Mansions of the Future. Photo by John Hartley

To support social distancing, Stunts – the first solo exhibition by artist Calum Bayne – can be viewed in person via appointment by contacting info@mansionsofthefuture.org. A carefully crafted virtual tour of the exhibition narrated by Calum is available (below) for those who want to experience the exhibition online.

A supporting interview between curator Colette Griffin and artist Calum Bayne will be published by YAC | Young Arts in Conversation, enabling audiences near and far to access and enjoy Calum’s exhibition.

Taking Bothwell Castle – a Medieval ruin and its surrounding forest as a point of departure, the work presented in this exhibition rejects linear temporalities to make flexible the monumentality of a ruin.

This ruin site, located near Glasgow, is of interest to artist Calum Bayne because of its easy-access, scale and well-preserved nature. Historically, it is a place of hostility, a landmark passed between English and Scottish powers during the Wars of Independence through the late 13th and early 14th centuries. Calum speculates that, as a member of the community living around it today, it would be more likely that you would “step in dog shit than step inside the castle doors.” And it is more likely that you would know the name of a dog walking round the site than the name of a battle that happened there” This light-hearted observation isn’t meant by Calum as a criticism, but a recognition that the castle is (in a way) liberated of its historic weight by its new function as a dog walking circuit.

People walk endlessly and routinely, through it.

Unlike the ruins of Bothwell Castle, Lincoln Cathedral remains intact. As a tourist in Lincoln Calum has considered the Cathedral’s status as a site worthy of pilgrimage and what this might mean to the Lincoln local. Does the relationship built through regular, even daily, interaction with the Cathedral allow for locals to overwrite a relationship traditionally built on religious ceremony – instead establishing the site within their personal narratives or as a tool to connect them with a more intimate history?

For Calum, who grew up a short walk away from its ruins, a site like Bothwell Castle creates a visible gap between how we might expect a medieval ruin to be historicised and the reality of its existence, as a backdrop to routine. This gap offers an opportunity to view the site as a sort of theatrical set that is admired, trusted even, because of its survival through time, but is contextually disregarded due to its contemporary public function. The gap described is the place that the work in this exhibition intends to occupy. Histories that are shared or personal, fantasised or real, have the potential to aspire to, or reject the status of a historic monument. The same mindset, driven by curiosity and association, is used when roaming this gap as privately roaming the internet. Walking the dog, fact, pining, artefacts, listening to pop and anonymity can all meet there. With this in mind Calum worked with Sof (aka VAJ.Power) to create the printed flyer graphic that litters the gallery floor.

Continuing to think about acts of pilgrimage and roaming Calum was informed by the film Freak Orlando (1981) when making the work included in Stunts. A cult classic directed by German filmmaker Ulrike Ottinger, Freak Orlando is constructed in five episodes, each one revolving around a pilgrimage but set in a different period of history. Ottinger is known for her queering of gender and sexuality norms, opulent costuming and rejection of linear narrative. Here Calum is inspired by Ottinger’s choice to be disloyal to traditional story arcs, especially when depicting historic happenings, in Freak Orlando. Ottinger abstracts history – at times even beyond recognition – to move beyond a typical act of preservation. The monumentality of history becomes impossibly flexible as it is saturated with subjectivity, and the audience must use fantasy as a tool of objectivity.

The work in Stunts attempts to enable the flexibility of a ruin, by temporarily binding routine, (dis)interests in the history of Bothwell Castle, personal fantasies and roaming as a way to interact intimately with history.

“Now there appears on the hill the outline of a procession

that becomes the more raving the closer it gets to the saint.

atone for their sins in an ecstatic procession of jumping and shaking.

They kiss the pillar devoutly and remain there for some hours

in devotion and meditation.

Subsequently, they stay in this place of pilgrimage at great expense

which somewhat reconciles the citizens to their excessive behaviour.

Now the procession is approaching rapidly

And we can see their black leather caps and…”

Special thanks go to Sof (aka VAJ.Power) for talking through concepts, being understanding and sharing their incredible skillset.

Calum Bayne is an artist based in Newcastle upon Tyne. Previous exhibitions include Good As Yours at System Gallery, Newcastle upon Tyne (2019), D.e.a.d., at The NewBridge Project, Gateshead (2019), and Arthouses, Whitley Bay (2018).

In the wake of the Covid-19 crisis we are working with commissioned artists to rethink and reimagine how the format can be interpreted, how new work can be shared and enjoyed together with audiences in a safe, often virtual and necessarily personal environment.

Stunts is Calum’s first solo exhibition and forms part of Mansions of the Future’s Lincoln Live programme March – September 2020 (Season extended in response to COVID-19). Departing from Lincoln’s rich entertainment and theatre history, Lincoln Live features new commissions which exist at the intersections of disciplinary boundaries. The season is a celebration of performative ventures that stand resolutely marginal to both the history of English theatre and the often exclusive, disciplinary rhetoric of contemporary performance art.